Maputo is the rapidly growing capital of Mozambique. The city has an estimated population size of 1,766,184 with a density of 5,100 people per square km (according to the 2007 census). Maputo has a formal downtown core, representing the historical city centre, which is now the central business district. The informal areas of the city are spread to the north and west of the downtown core. This formal/informal distinction also characterizes the food system in the city. Within Maputo, supermarkets, informal shops, urban agriculture and rural food transfers all contribute to the definition of the city’s food system. Together these characteristics make Maputo a vibrant and dynamic example of how the formal and the informal can give rise to a unique food system. 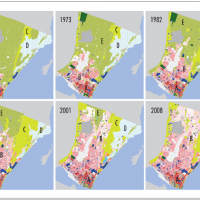