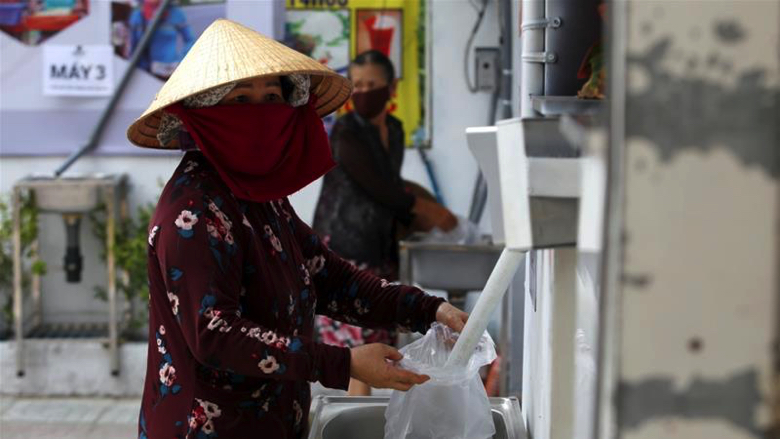 As the world fights the COVID-19 pandemic with lockdowns and shutdowns of economies globally, countries have rushed to approve economic stimulus packages to provide relief to families, small business owners and corporations. Rightfully so, the world is now fully focused on containing the pandemic, minimizing loss of life and making sure people have enough money to buy food and pay their bills. During a lockdown, agriculture is excluded from all restrictions but, when the entire economy is under a lockdown, it is a challenge for farmers to carry out farm operations. Once the pandemic is brought under control, most sectors of the economy can be kickstarted, but agricultural production has strict planting and harvesting schedules and cannot be ramped up at will.

If the problem were limited to one country or region like previous pandemics such as Ebola, Severe Acute Respiratory Syndrome (SARS) and Middle East Respiratory Syndrome (MERS), one wouldn’t worry as much about food shortages and price hikes in the affected country or region, which could be easily addressed by bringing in food from other countries. We are now in completely uncharted territory with the current global pandemic covering more than 170 countries and territories. The number of confirmed cases grew with an exponential increase from 88,400 to 962,977 from March 1 to April 2, 2020. The epicentre of the pandemic also shifted continents from Asia to Europe and now to North America. As of March 31, 2020, more than three billion of the total global population of 7.8 billion were under some form of lockdown ranging from restrictions on movement and evening curfew to complete lockdown of the entire country. As China relaxed its six-week-long strict lockdown for 50 million people in Hubei Province, the world’s second most populated country, India, entered a three-week complete lockdown of its 1.3 billion people. Now, experts believe that this pandemic is not going to disappear in a few weeks or months: it may stay until the end of the year or even beyond.

This pandemic has shut down economies around the world, with millions of migrant workers losing their jobs. These migrant workers represent the lifeline of agriculture, with a heavy dependence on them from planting to harvesting. This is more so for Asian agriculture, where the level of mechanization is not that high. During the lockdown, seasonal migrant workers have returned to their hometowns and villages. We saw chaos last week on Indian streets, where millions of migrant workers were desperately trying to return home after the announcement of the three-week national lockdown. Even after the lockdown ended, Chinese agriculture faces a severe labor shortage for spring planting because migrant workers haven’t returned from their homes. The lockdown has also severely disrupted farm supply lines such as for seed, fertilizer and transportation.

Unlike other sectors, agriculture is heavily affected by the timing of the lockdown rather than the duration because of the strict planting and harvesting calendar. If the planting season is missed, there will be no crop for the season or for the entire year. Many countries and regions, such as China, North America and Europe, face labor shortages and supply line disruptions for their spring planting. If they miss the planting window, they are done for the entire year. In many other parts of the world, such as in India and other South Asian countries, this is the harvest time for many winter crops such as wheat, potato, cotton and many other fruits and vegetables. Wheat farmers in Punjab and Haryana, the major wheat-growing states in northwestern India, are worried about their harvest without migrant workers who operate combine harvesters and do other manual work such as loading and unloading the produce.

They are also worried about government procurement of wheat during the lockdown and afterward. Moving beyond wheat, the labour shortage will have a more significant impact on the potato harvest all along the Indo Gangetic Plains (IGP) covering Punjab, Haryana, Uttar Pradesh, Bihar, West Bengal and Bangladesh, which account for a majority of the total production in the region. Potato is considered a major staple for a majority of the South Asian population. In Eastern and Southern India, the harvest of rabi rice (dry-season rice), maize and pulses is also severely disrupted. The lockdown or other forms of restriction are likely to affect the agricultural sector in the entire region. The recent nationwide lockdown of Thailand witnessed the exodus of thousands of migrant workers from Cambodia, Myanmar and Laos. The planting of the main rice crop, maize and sugarcane in Thailand will begin in the next few weeks but will have serious consequences if the migrant workers don’t return to work by planting time.

This raises the obvious question of the implication of national lockdowns and the spread of COVID-19 on global and Asian food security, specifically in developing countries. At the macro level, the good news is that the expected 2019-20 world production (1.26 billion tons) and carryover stocks (469 million tons) of food grains (rice and wheat) are at all-time highs. Out of the 469 million tons of global inventory, more than half (266 million tons) is in China. In the case of Asia, food security is largely linked to the availability and affordability of rice because it is the most important staple for the majority of the population. Again, globally, the inventory is at an all-time high at 182 million tons, with China accounting for a whopping two-thirds of the total inventory (118 million tons). In the past ten years, most of the increase in the global inventory has been due to an increase in Chinese stocks, that is, 73 million tons out of 80 million tons. For any stability of the global rice market during and after the COVID-19 pandemic, China will have to play a major role in quelling the panic.

In March, rice prices strengthened quite a bit, with nearly a 20 percent jump in Thai white rice prices upon the news of Vietnam, the third largest exporter of rice in the world, restricting rice exports and the largest exporter, India, entering a three-week national lockdown. The price of wheat also increased by 15 percent in the second half of March on the back of panic buying by consumers and spring crop concern due to the lockdowns in North America and Europe. Even before the March spike, rice prices were close to their five-year high with a steady rise since late 2019 on the back of severe drought in Thailand and strong demand from Asian and African importers.

With no sign of the spread of the COVID-19 pandemic slowing down, more countries are opting for a lockdown and complete shutdown of their economy to contain the spread. It is almost certain that we are moving toward a global recession. At the same time, it is impossible to predict the recovery time and path as each country will have its own. The recession and prolonged shutdown will strongly affect billions of middle-class and poor people in developing Asia. According to a recently published World Bank report the COVID-19 shock would increase poverty in the East Asia and Pacific region by 11 million people as compared to the 35 million people that would have been lifted above the poverty line in 2020 without COVID-19, that is, a swing of 46 million people. If one adds South and Southeast Asia, the number of people pushed into poverty would increase by many more millions.

Higher unemployment, low disposable income and more people below the poverty line in developing countries are likely to cause a shift in consumption patterns from high-value food products to staples. With higher demand for staples such as rice and wheat, countries will be extra vigilant to not have food crises while fighting the COVID-19 pandemic. This is already evident from the pre-emptive actions from a few countries to ensure domestic food supplies by restricting exports and scouting for imports. The Bangkok Post on March 31, 2020, reported that the Philippine government was planning to import 300,000 tons of rice to ensure its domestic supply as it fights the spread of COVID-19. Vietnam is already mulling imposing a limit on rice exports for the rest of the year. One cannot blame countries for ensuring their domestic food security during this trying time, but countries need to be extra careful in taking unnecessary policy measures that could create panic in the market. This is particularly true for the rice market, which has a history of crises through export restrictions and panic buying.

Countries should be aware that enough grains exist in warehouses to feed the world for more than four months. But these grains are of no use if countries resort to trade restrictions. All large grain producers have a responsibility to keep their borders open so that grains reach where they are needed the most. China, with more than half of the global stocks, has the extra burden of playing a pivotal role in maintaining global food security. Similarly, grain importers have a responsibility to not resort to panic buying. The rice market should be extra careful with rice prices already at a five-year high. Unilateral actions by a few rice exporters (China, India, Thailand and Vietnam) could create a food crisis in many low-income rice-consuming countries in Asia and Africa.

At this point, countries should ensure that farmers have whatever they need to plant, harvest and market their crops. This includes labor, inputs, service providers, transportation and markets, among others. If the food supply chain is broken, imposing trade restrictions would not do a country any good in ensuring domestic food security.

This blog was first posted at https://cipotato.org/blog/world-needs-keep-close-watch-agriculture-while-battling-covid-19-pandemic/ and is reposted here with permission