The Vendor Conundrum in Mzuzu, Malawi

On a warm day in April, a large group of vendors walked slowly up the northern side of the “Mzuzu Highway,” the divided main road in Mzuzu, Malawi’s third largest city. In their possession was a petition signed by the majority of stall owners in the Main Market. The protest walk ended at the Mzuzu City Council offices and the petition was deposited on the CEO’s desk with an ultimatum – daily vendor fees would not be paid to the City Council until the ‘illegal’ vendors outside the Main Market were removed.

Street vendors sit outside the Main Market, close to the footpaths where people walk to and from their homes, providing easy access to fresh food. Why would someone passing by enter a market when the tomatoes they want are right there? This is why building new market spaces has not solved the problem – street vendors go where the people go and will not set up shop far away from the road. Sitting outside the market means that you often sell from the ground on grass mats, but it also means not having to pay a stall fee. These vendors take a chance with their wares; on any day the police, instigated by City Council, will remove them from the area. Street vendors have become practiced in gathering their goods with speed and running away. Those who are caught often have their goods confiscated, leaving them with a loss.

Part of my research aims to understand the interwoven nature of governance and the city’s food system. Governance is essentially how rules are set, applied, and enforced through laws, norms, or power. The vendor situation is a good example of how the food system’s governance (its structures and rules) reacts to an outside influence of politics and norms.

2019 is an election year in Malawi, and campaigning has already begun. This makes the vendor issue tentative political territory for anyone running for office. Newspapers cover visiting politicians who invite street vendors to rallies, handing out chitenje cloth and extolling the importance of all vendors. Others invite the stall vendors to meetings, providing promises of better market venues and enforcement. Both the market and street vendors understand the political game and neither group blames the other for the current situation. There is an understanding between vendors – everyone is trying to feed their family with their profits. They will sell to each other and interact as needed, and both will advocate for their ability to do their work.

For now, there is a tentative pause – the city collector does not come to the Main Market to collect fees. The street vendors know that they are safe from being chased until after the election. The market vendors are currently free from paying their daily fee. And Mzuzu City Council remains stuck with a problem that is expensive to control and politically awkward. 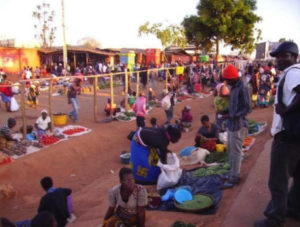 “Vendors outside of Mzuzu Main Market.”