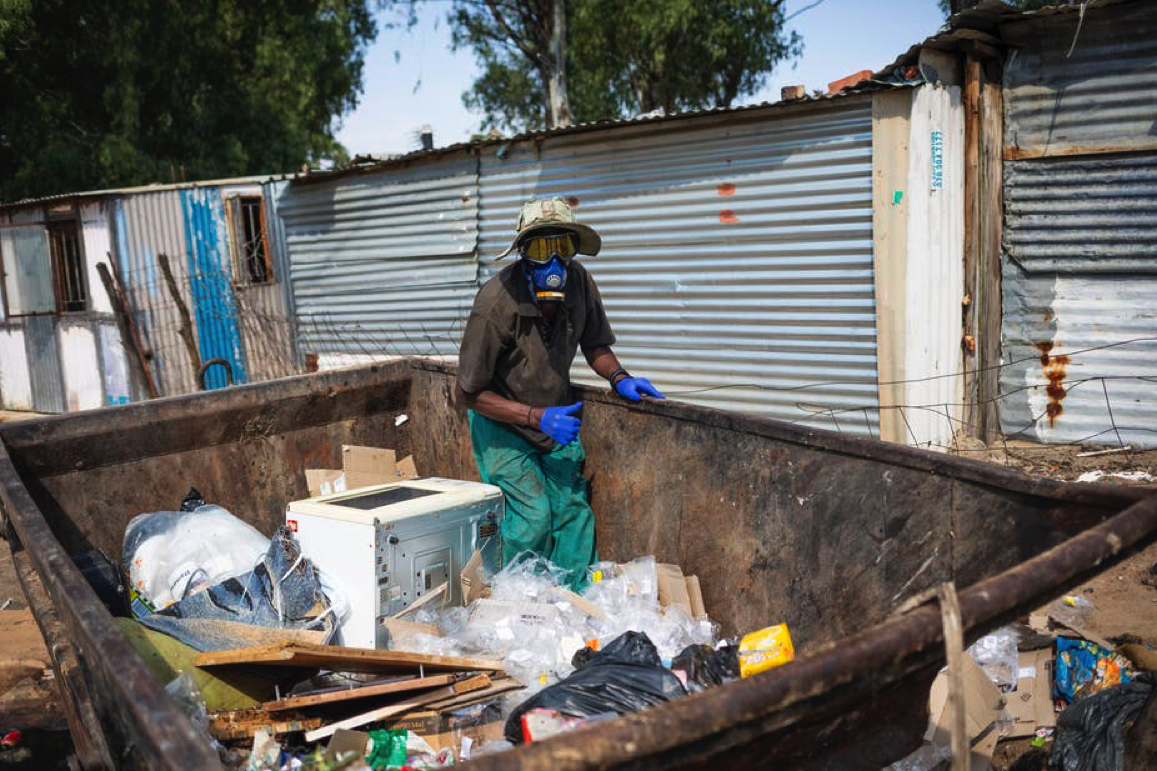 Lockdowns to prevent the spread of the deadly coronavirus are dramatically transforming people’s daily lives across the world. One thing that remains unchanged is that we continue to produce massive amounts of waste each day.

South Africa generates 59 million tonnes of general waste a year. As only 10,8% of urban households separate their waste, most of the recyclable items get thrown away. Yet the country has recycling rates comparable to European countries for some materials. This is thanks in large part to reclaimers who, through what I call their ‘separation outside source’ system, separate people’s recyclables, just outside their homes and at landfills. After salvaging the recyclables, the reclaimers haul them great distances, sort and clean them. They sell the materials to small buyback centres, who sell them to larger buyers. The recyclables are subsequently resold for export or as inputs for production.

South Africa’s 60,000 to 90,000 reclaimers collect an astonishing 80% to 90% of used packaging and paper that are recycled, providing crucial inputs for production and saving municipalities up to R750 million a year (US$41.7 million) in potential landfill costs. Despite their significant contributions, reclaimers in South Africa (as in most countries) are not paid for the service they provide. Instead, they earn a pittance when they sell what they collect.

South Africa’s measures to flatten the COVID-19 infection curve are making reclaimers’ situation even worse. Since the country went on lockdown at midnight on March 26, 2020, reclaimers have been locked out of landfills and cannot work in the streets. They have also been excluded from all forms of government support.

That the measures announced by the government leave reclaimers out should come as no surprise. Current government policies on waste and recycling do not meaningfully include reclaimers. Their central role in the sector is overlooked by an economic model that assumes that a part of the economy can be hived off as “informal” and deemed irrelevant to policy development. This has enabled municipalities to completely ignore the separation outside source system and implement recycling programmes that dispossess reclaimers. This is not unique to South Africa.

The exclusion of reclaimers continues through the government’s responses to COVID-19. Waste management was declared an essential service, allowing workers in this sector to keep working. Not so reclaimers. This, despite their crucial role in municipal solid waste management systems. Like millions of other workers considered informal, they are not eligible for government financial support programmes.

Many governments are disseminating information on how long the virus remains on different materials so that people can protect themselves when they purchase and use them. But, there are no public service announcements on how to dispose of the same products to minimise risks for reclaimers.

In South Africa, as in countries like Brazil and India, this burden has fallen on reclaimers.

According to information gathered by the Global Alliance of Waste Pickers, reclaimers in a number of countries have been affected in similar ways by government responses to COVID-19 that ignore them. Some core demands are emerging. These include permission to continue working; personal protective equipment, soap and washing stations; free rapid testing and health care; a basic income; and food parcels.

In addition, reclaimers in South Africa are demanding inclusion in the R500 million (US$27.8 million) government fund to cushion small businesses from the ravages of the virus. The South African Waste Pickers Association and the African Reclaimers Organisation want a declaration that they are essential service providers, a simple process to obtain permits, and protective equipment.

The reclaimers’ demands are in line with the “Guideline on Waste Picker Integration for South Africa”, which recognises and values reclaimers’ role in the sector. Although it must still be published, the guideline was agreed by all stakeholders. The pandemic creates an opportunity for the government to implement the guideline and support reclaimers. Whether and how industry and municipalities that rely on reclaimers for profits and savings will assist them is unclear. But the clock is ticking: reclaimers earn their incomes daily and are already struggling.

In the absence of government support, not being able to work means they don’t have money to buy food. It is crucial that the government designate reclaimers as essential service providers without delay, and give them masks, gloves, protective gear, sanitisers and access to health care. They need access to public spaces and buildings to store their materials, as well as trucks to transport them. Reclaimers need public washing stations, food packages, rapid testing and income support needed by millions of other South Africans.

Many livelihoods are at risk. Resources must be made available to fund reclaimers, along with other essential activities, vulnerable workers and the unemployed.