The rapid urbanization of Nairobi city has created changes in local food supply systems and constant fluctuations are witnessed as people respond and adapt. Even as new formal housing is erected, informal settlements are mushrooming within the same neighbourhoods, and these two worlds interact in a unique manner. The formal settlements are places of employment for the urban poor who are mostly residents of informal settlements. These jobs are an avenue through which they access food, as most households in Nairobi rely on food purchased from either formal or informal retailers. Given the low wages from this form of employment, formal food outlets such as supermarkets are far out of reach for most of the urban poor. However, as supermarkets emerge within residential areas, the urban poor do get the opportunity to purchase some of their bulk food items, particularly processed foods. The urban poor, who spend more than half of their income on food, also undertake food for work programs within the formal settlements.

As a survival strategy, residents of the informal settlements, and particularly women, establish small-scale businesses in form of food and vegetable kiosks which supply relatively affordable daily vegetables and fruits. Although these informal food outlets are mainly a food source for the urban poor, current economic hardships in Kenya (characterized by high unemployment and inflation rates) mean that the urban middle class are also patronizing the food kiosks. However, the lack of diversity of the foods supplied by informal vendors remains a challenge as some foods preferred by customers are not available.

Unhygienic conditions with water-borne and water-related diseases are a persistent feature of urban life, especially within the informal settlements. Those in the formal areas inevitably feel that the foods supplied by informal vendors are therefore of lower quality. They raise questions about the source of these foods. Earlier studies within Nairobi city reveal that some of the food that ends up in the supply chain is planted on heavily polluted riverbanks and dumpsites within the city, an issue that was reiterated by my study participants. Not having an idea of where the food comes from makes residents of the formal settlements uneasy about the implications for their own quality of life. They consider that food from the rural areas is much better for their health and wellbeing. 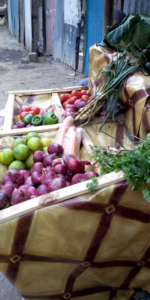