Jane’s Walks are citizen-led walking tours that make space for people to observe, reflect, share, question and collectively reimagine the places in which they live, work and play. In the Waterloo region, there were 11 Walks on Saturday and Friday 4th and 5th of May. QE Scholars Olivia Yuan Yuan and Robert Kinlocke joined in the work entitled “Non-places” from the University of Waterloo to Uptown. Walk organizers, Hanna Negami, a doctoral candidate at UW and Stephen Trothen, a teacher and UW Alumnus, described the “Non-places” walk as follows: an attempt to explore transitory spaces most often unseen (either hidden or ignored) on a walk from UW campus to Uptown Waterloo. Employing Marc Auge’s notion of non-place, the walk attempted to draw attention to the tunnels, paths, and areas that serve to move people from one place to another in and around the city. At various stops along the walk, Hanna and Stephen encouraged the group to reflect on whether a specific space is a place or a non-place.
Some of the “non-places” they visited: 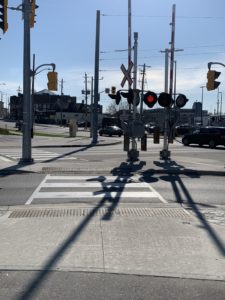 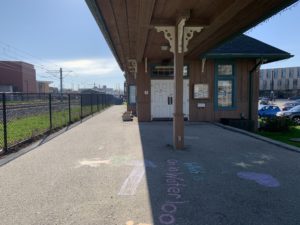 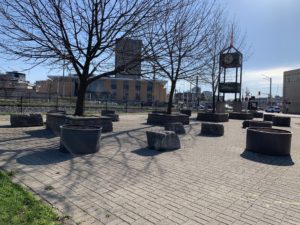 Olivia is working on her Ph.D in human geography at Nanjing University and Robert completed his Ph.D in geography at University of the West Indies, MONA. Their QES research focuses on various aspects of urban food security in Nanjing and Kingston, respectively, and this Jane’s Walk on exploring the city of Waterloo was an interesting experience.