HCP Workshop on Informality and the Urban Food System: Policy, Practice and Inclusive Growth Through a Food Lens 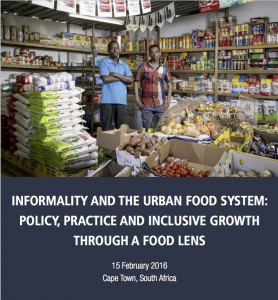 As the Global South continues to urbanize at an unprecedented rate, the continent’s cities grow hungrier and hungrier. The crux of this issue lies in urban planning and other top-down decisions that currently privilege the formal retail sector, despite retail in the informal food sector being such a key component in the urban food security equation.

It was reported in 2013 that more than half of South Africans do not have regular access to sufficient food. Similarly, in Maputo 43 percent of informal food traders come from severely food insecure households, according to Cameron McCordic, a researcher at the Balsillie School of International Affairs.

McCordic was one of the 19 speakers at the Hungry Cities Partnership (HCP) Conference held at the University of Cape Town’s Graduate School of Business on February 15. The HCP links researchers in major cities of the South in the planning and implementation of a five-year inter-disciplinary research and knowledge mobilization programme addressing urbanization, food security, informality and inclusive growth. Despite the irony of supplying a seemingly endless buffet of food, the conference successfully brought together leading researchers and urban representatives from various African cities, Canada, the U.S, South America and China, to discuss the intertwining issues of informality and the urban food system, with a focus on policy, practice and inclusive growth.

The biggest question when it comes to understanding food security in African cities, said Edgar Pieterse, director of the African Centre for Cities, during his talk, is how to imagine and effect Africa’s structural transformation – that is, the fundamental changes to policies and objectives that need to take place at a large scale to better use the continent’s resources and bridge inequalities. Since food security is not simply an issue of production, and as “unthinkable inequalities” continue to emerge, this has become a global scale question, said Pieterse.

This observation has opened significant gaps in urban food system research debates across the global South. Recognizing one such gap, Thomas Reardon, a food and resource economist who Skyped-in to the conference from Michigan State University, explained that a double revolution is happening in developing countries’ food systems: the “supermarket revolution,” and the “quiet revolution,” which sees the rapid emergence of tens of thousands of SME’s (small/medium micro-enterprises) along rural-urban supply chains.

Given their role in feeding a vast majority of Africans, it’s no wonder these SME’s, more specifically informal food vendors, stole the spotlight at the conference. The speakers took attendees on what conference chairperson, Godfrey Tawodzera, called a ‘metaphorical flight’ across the world, with landings in the informal food economies of different cities. This flight took off in Cape Town and Johannesburg, flew across to the cities of Windhoek, Nairobi, Harare, Maputo and Nanjing, and then went on to Ghana and Uganda to give some empirical insights into their informal food economies, as well as the intersecting geographies of informality and formality in urban food systems.

The University of Cape Town’s Percy Toriro, whose research focuses on informal traders in Harare, Zimbabwe, highlighted how governance can restrict informal food traders and impact food security. In Harare, traders are subject to repressive regulatory frameworks and police bribery, since the misuse of power is rife — a picture all too familiar in many African cities. This restrictive environment makes trading very difficult, directly influencing food security since informal traders supply food to a large portion of the urban population. Given the current political climate in Zimbabwe, Toriro said it’s a good time to inform and re-examine policies and make plans towards more sustainable and equitable governance and regulation around informal trade– ultimately, tackling food insecurity.

Other speakers raised concerns about cross-border trading and rising obesity due to consumption of imported, high-sugar processed foods, which in being cheaper and desirable, are replacing healthier traditional foods, like Mozambican cassava leaves.

Ultimately, the take home message about urban food systems, said ACC researcher Caroline Skinner, is a growing sense that “the formal and the informal are deeply intertwined”– a relationship we need to understand if we are to successfully target food security.

What South Africa can look forward to, following its drafted introduction at this conference, is the release of the Western Cape Government’s Food & Nutrition Strategy, which is putting forward six pillars of focus: access, health and safety, planning intervention, sustainability and resource use, inclusive food economy, and governance. It seems promising that if implemented effectively, these pillars will inform more inclusive, food sensitive planning across formal and informal sectors, honing-in on a food security gap that must be bridged.