The hidden cost of a pandemic 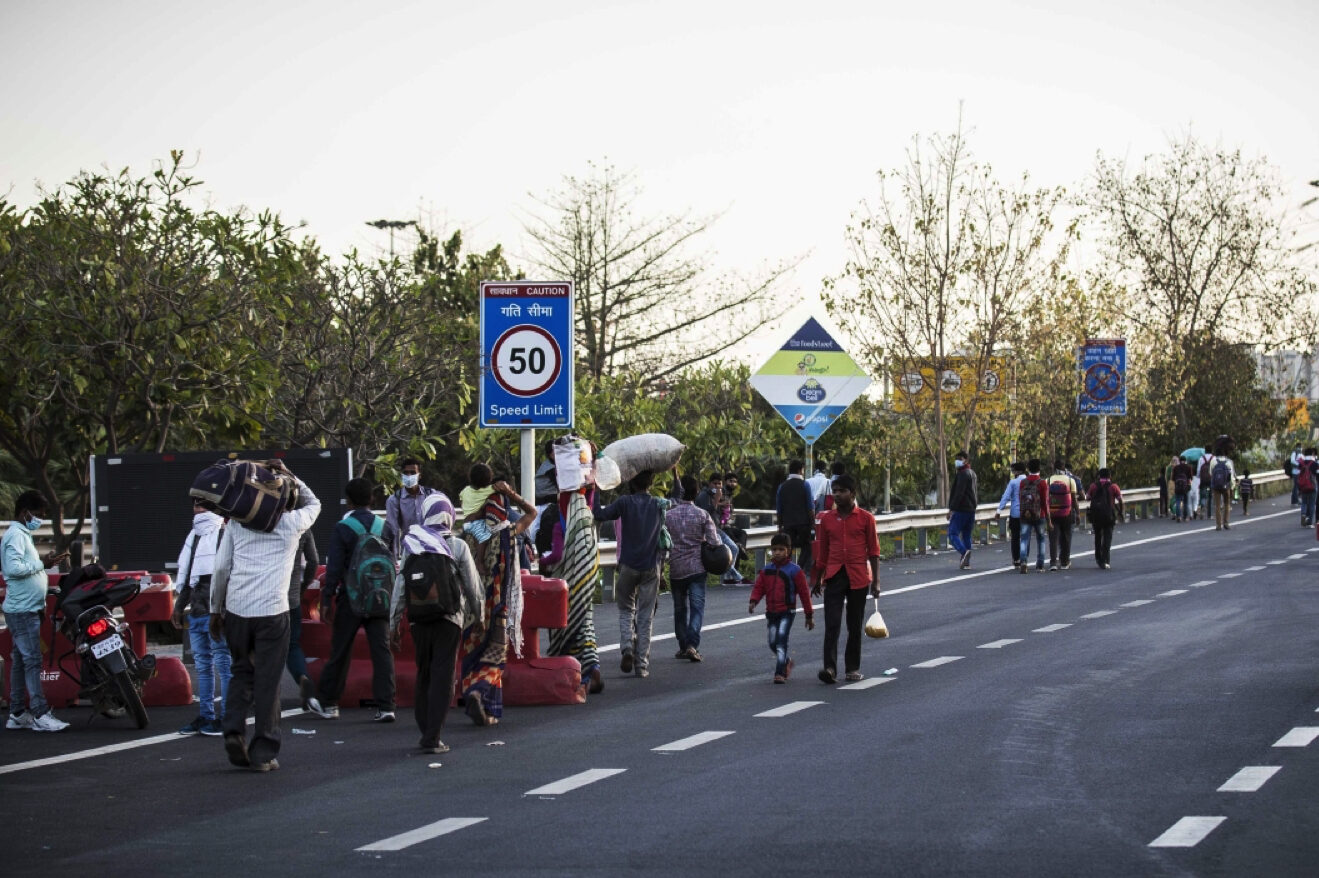 Over the last ten days or so, news about the plight of migrant workers as seen through images of people in Delhi, Karnataka, Thiruvananthapuram, Madhya Pradesh, U.P, and Bihar presented a horrifying account of the egregious conditions of footloose migrants, rendered homeless and jobless at short-notice.

The unilateral action of an unplanned three-week blanket lockdown has left the entire migrant population (working as daily-wagers, street vendors, landless farm workers, construction workers etc.) extremely vulnerable, fearing for its basic livelihood and survival. Under the circumstances, assessing the degree of vulnerability for a group or individuals doesn’t only stem from the nature of their vocation or economic livelihood. Vulnerability, needs to be defined as “the degree to which a population, individual or organisation is unable to anticipate, cope with, resist and recover from the impacts of disasters (pandemics, epidemics included)”

Health-risks of Pandemics like Covid-19, Influenza and similar global viruses are distinct for individuals depending on their different socio-economic positioning in a given society (as shown in Figure 1 below). Few factors responsible for differentiated risks surfacing from a pandemic or a disaster, include risks associated with changes caused to nutritional (health) status; access to healthcare, and risks from a prolonged social distancing behaviour. As depicted by the last column of causal boxes in figure below, these factors are pertinent as they lead to differential susceptibility as well as disease severity for different populations. 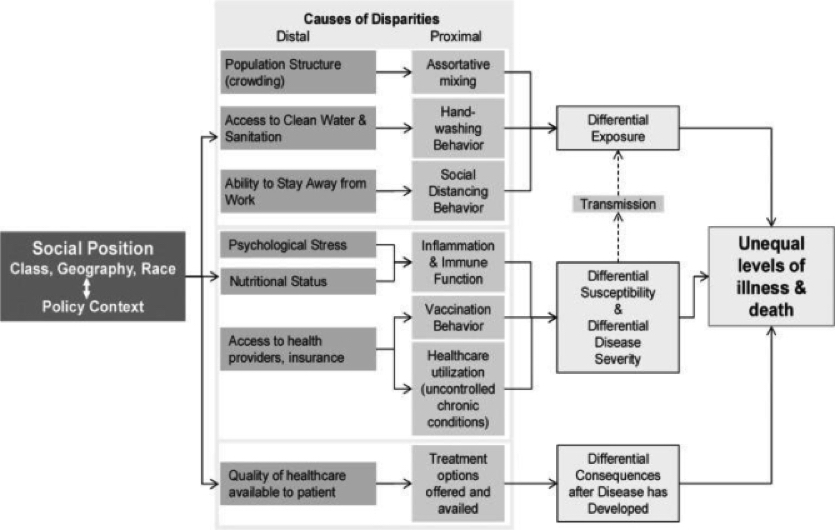 A pandemic outbreak like Covid-19, where social distancing is a key community level mitigating factor, has led many countries, including India, to impose work/assembly restrictions and in some cases, complete lockdowns. However, if sanctions issued by the government and employers are prolonged in nature (or extended beyond a given period of time), these have direct adverse effect on the employment status of most vulnerable individuals.

In India, the labour participation rate for the month of March 2020 has fallen to a record low of 41.9%. For the informal sector, that employs most of the vulnerable population of the country, a post-pandemic loss of about 136 million jobs is expected. The sudden occurrence of ‘lack of work’ for the former group as compared to the ‘continual lack of work’ for the latter, makes unemployment a major contributor to psychological distresses during pandemics.

While a discussion on assessing and understanding economic costs of a prolonged lockdown on India’s vulnerable population and the whole of its citizenry remains a subject of much interest now (and perhaps in weeks and months to come). However, most of these computed or projected costs are often measurable over a period of time, which includes either the costs surfacing from the lockdown itself, or, the costs likely be seen in the subsequent period to follow say, on business and sectoral activity (once normalcy returns).

There are critical hidden costs that grow beyond these projected costs alone, and for which, all stakeholders including the government, may need to be wary of, now and in times to come.

For those at the margin, these hidden costs include-

Prolonged blanket measures like lockdowns cause high negative externalities that make it necessary to balance “economy and epidemiology” as noted by Sergio Rebelo. Much of the world economy is facing a slowdown. What began as a supply-shock from products moving in and out of China, has now globalised into a massive supply and demand shock. From a classical Keynesian downturn, we are now transitioning to a Keynesian tailspin. A record of 6.6 million individuals have applied for unemployment benefits in the United States alone. In India, the mere 21-day period of lockdown is expected to cost the economy of ₹8.76 lakh crore, according to some estimates.

According to a 2009 study calculating the cost of strategies that helped mitigate influenza, the most expensive turned out to be costs surfacing from school closures and shutdowns. It comes as no surprise that the Centre for Economic Policy Research has claimed that containment measures might flatten the infection curve over time, but steepen the recession curve. As a result, recessions can be a good-vantage point to see (and understand) the potential psychological impacts of unemployment. 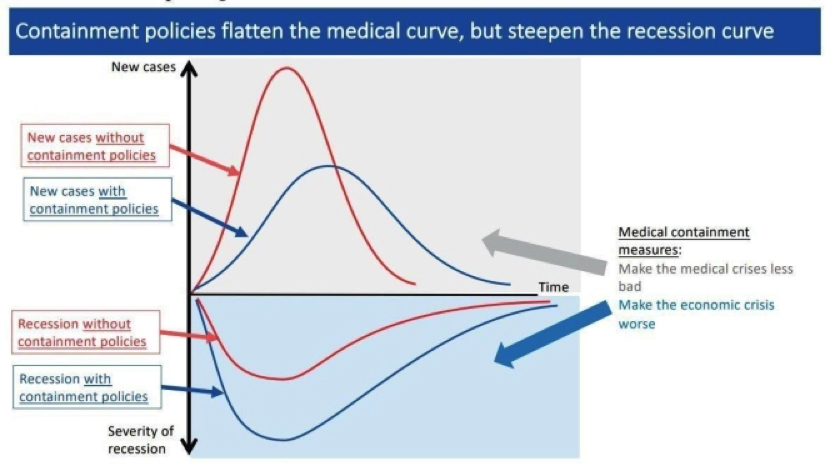 A study in 2018 uses the Spanish National Health Survey to indicate the psycho-social impact of long unemployment spells (that can be anticipated in the case of the coronavirus) during the Great Recession of 2008. These are likely to be far worse now -given the deeper (or more) acute nature of the recession caused.

Estimates show that vulnerable groups, most of whom are facing a loss of employment, are 25% less likely to report being able to overcome their difficulties and 22% less likely to think they play an important part in things. The figure below displays an alarming trend: those reporting a feeling of uselessness during the 2008 recession peaked at 18% among unemployed individuals as compared to 4% among the employed. 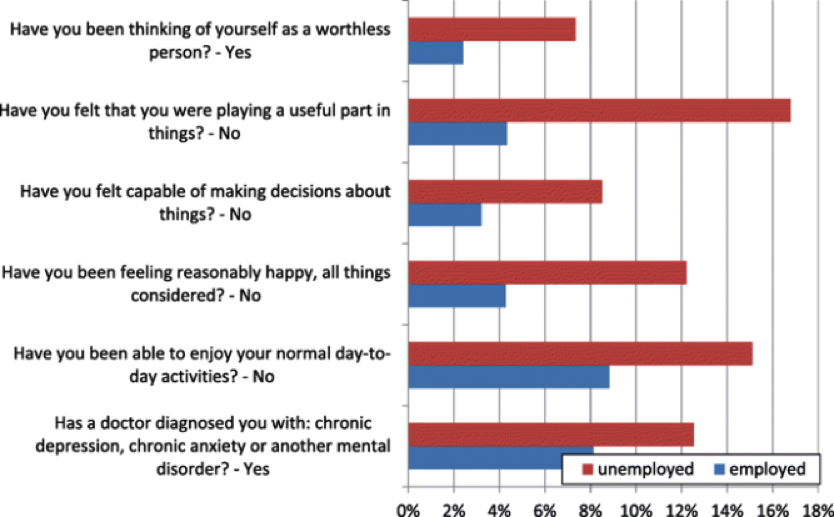 The perception of self-worth can impede post-pandemic job seeking for the very groups that need it the most. While demand for labour can be regulated by government interventions, psychological impacts on supply of labour can be left unchecked and ignored if the hidden costs are not acknowledged on a policy-level.

An earlier study estimates the impact of sudden shocks of unemployment (in terms of incidence of the shock as well as duration of the shock for which it lasts) on the individual’s perceived ‘locus of control’. Locus of control is a measure developed by J.B. Rotters, the founder of social learning theory, that characterises people as internalisers i.e. people who feel they have control over their own lives and fates and externalisers i.e. people who look for external sources of affirmation and have no responsibility of what happens to them.

The study shows that the impact of unemployment is gendered as female youth suffer psychological scars to due lack of employment. Their self-perception of efficacy declines which impacts their ability to work in the future and the position they hold in household and societal decision making.

For women in South-Asia, who constitute a major part of the vulnerable population due to social conditions of patriarchal gender norms, such effects can be disastrous. In Uttar Pradesh, India, 33% of women have reported physical violence, of which 94% has been sexual in nature. Quarantine measures across the country have led to a surge in cases of domestic abuse, which had already soared in places like UP. Coupled with the psychological scars of unemployment that affect women more than men, the costs of the pandemic prove much higher for women.

A likely impact of a pandemic on nutritional health outcomes can be looked at in two ways: (a) on individuals of different age groups with varying nutritional statuses; and (b) on children born during the times of pandemic that is likely to restrict nutritional access. The distribution of nutritional deficiencies in India highlight the country’s underlying health inequities. Past empirical study of consumption data shows that individuals with economically challenging backgrounds are more likely to be nutritionally deficient across India. As far as (a) is concerned, pandemics and the consequent attempts at social distancing lead to the break-down of food supply chains making nutritional access harder for vulnerable populations. Less than 20% of individuals in low-income countries have access to food-based safety nets, creating challenges for daily calorie requirements. Further, the aggregate demand in the economy falls during recessionary trends, leading to a decline in average incomes as well.

As a result, due to structural issues and shocks, lockdowns restrict consumption and nutritional access of the poor through a fall in real wages and through restrictions in access. Physiological studies using mice-models  have revealed the impacts of levels of nutrition during influenza pandemics. They show that the nutritional status of the host (that coincides with economic background in India) impacts the incidence of virus. Energy restrictions impact the immune system and adversely affect the body’s innate responses to influenza.

In the case of (b), children born during the time of pandemics are exposed to adverse in-utero conditions and are thus more likely to have persistent health effects during their lifetime. This is classically defined as the foetal origins hypothesis first developed by epidemiologist David Barker. Evidence for this can be seen in recent studies that show how in-utero exposure to influenza in the first trimester of pregnancy is likely to increase the neonatal mortality rate and preterm birth. 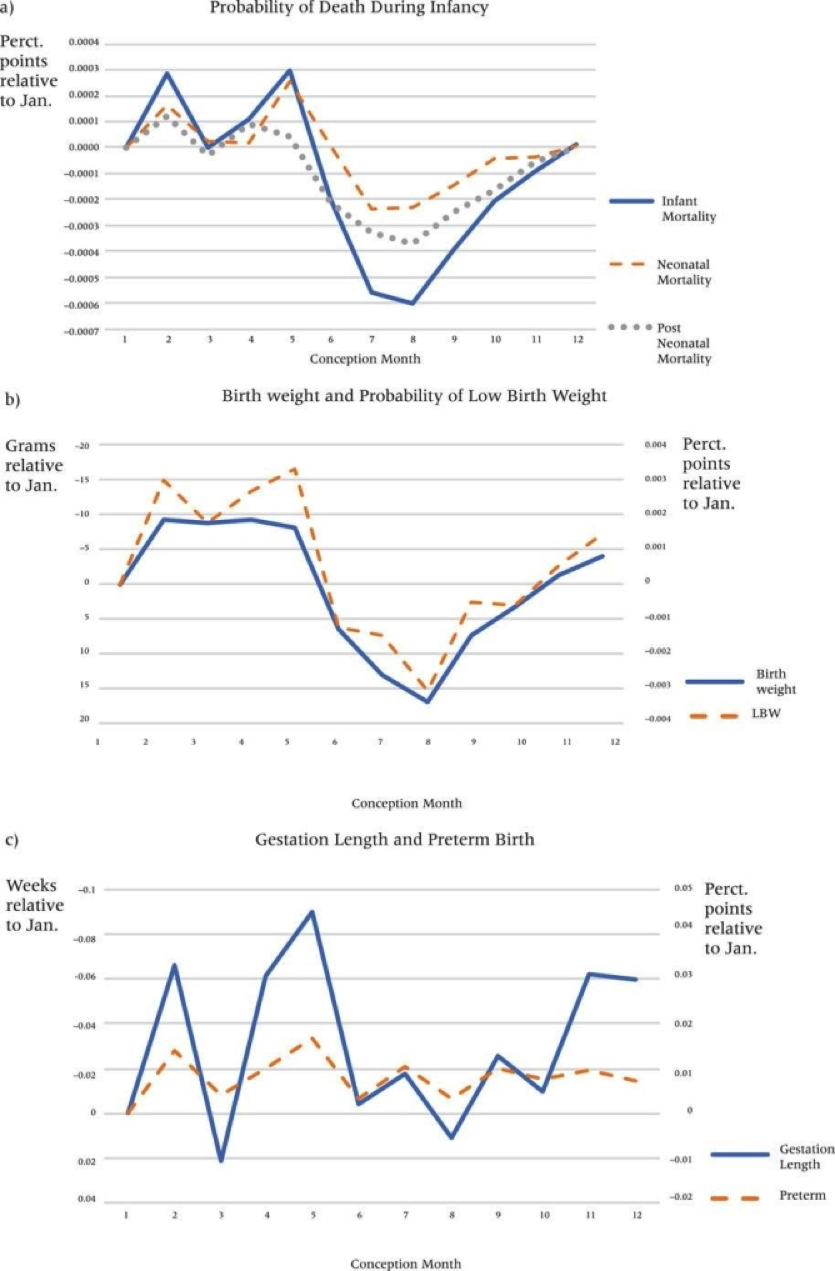 The figure above shows that birth outcomes are on average worse for infants conceived in May, the month when the influenza epidemic peaked. The study also shows that exposure during the second trimester is associated with increased risk of low birthweight. Low-birthweight infants are at increased risk for Type-2 diabetes, hypertension, and coronary artery disease, and similar diseases.

While the U.S., a country with much higher levels of average nutrition and foetal nutrition, showed adverse effects of pandemics, developing countries are much more susceptible to similar health-risks. Infant mortality in India shows an urban bias with rates peaking in rural India. In such a scenario, Covid-19 related mortality as well as morbidity can have long-term effects on an affected cohort of kids.

Social Distancing is a privilege that upper-class Indians may afford for longer periods of time, but for the whole of the citizenry, especially lower-class workers, and those living on day-to-day wages, the economic and psycho-sociological costs of a prolonged lockdown would range from concerns surfacing from being forced into acute unemployment, losing livelihoods, and their residential habitat(s) to high psychological costs which have serious long term ramifications.

For migrants, the concept and value of home often has a transient meaning. Most of those who have now been able to get home – back to their native places – would have to psycho-socially adjust to the existential realities of a new beginning. The psychological costs surfacing from unemployment and changes in the distribution of nutritional deliveries from breakdowns of food supply chains as a response to pandemic-induced lockdown, are two major hidden costs that merit deeper scrutiny and policy recourse.

This blog first appeared at https://www.fortuneindia.com/opinion/the-hidden-cost-of-a-pandemic/104387 and is reposted here with permission.