Crossing Realities: My Experience as a QES-AS in Waterloo, Canada

Ever since I became interested in food security issues, especially food insecurity in the city where I was born, Thomas Edison’s words have always illuminated my mind like a flashlight “The doctor of the future will no longer treat the human body with drugs but will heal and prevent disease with nutrition”.

My stay in Waterloo was a true crossroads of contrasting realities. I came across new realities about food markets and what people in Canada grow and eat. I discovered Portuguese bakeries that made me feel at home. In Kitchener, I found a diversified food market of local produce and international foods including some imported from Africa. Food truly can globalize cultures.

The Kitchener market had everything to “feed” and not just to “eat”. From what people bought, it was clear that they were going to “feed themselves” and not just on “red meat”. They also bought lots of vegetables and lots of fruits. In Waterloo I also was impressed by St. Jacob’s Market with a lot of crafts and people with a smile of solidarity, which was confirmed when I saw an object of art with the flag of Mozambique. I came away feeling that it is worthwhile to study urban food (in)security in a comparative context. At home, the subject of my research is KaNyaka and KaTembe, both administratively part of the city of Maputo. I now view the food system there as part of a globalized food culture with connections to many other parts of the globe. 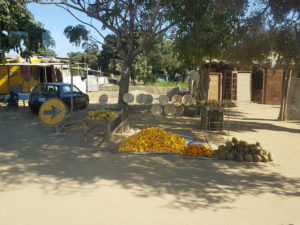