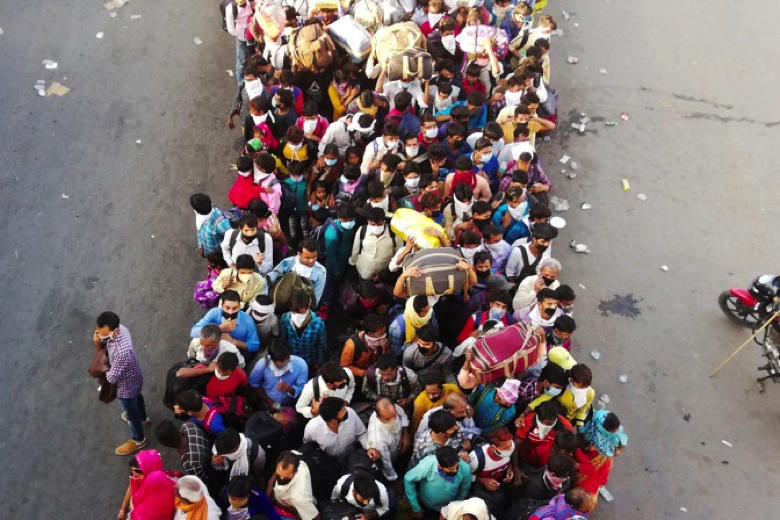 Two weeks have passed since the lockdown in India started as a measure to arrest the spread of COVID-19. As a result of the decision, those engaged in jobs that can easily be carried out under ‘work from home’ mode largely remain unaffected, but the majority of workers in India, belong to the informal sector, and are facing extreme hardships, as they have lost their jobs with this announcement. We saw a massive exodus of workers from cities to their villages and native places. Millions of workers desperately started their journey back home even knowing that public transport is also suspended, as they can’t afford to live in cities without earnings. In some extreme cases, workers were seen marching for hundreds of kilometres, with their entire family including children. The sight of migrants carrying children or elderly on their shoulders was also highlighted by media. Despite repeated admonishments by the Government to these workers, there was no halt and this gigantic movement of workers has been compared to the historic mass migration during partition of undivided India.

The main reason behind this mass migration after the announcement of lockdown is the forthcoming economic crisis resulting from job loss. As the cost of living in cities is higher, it is not possible for workers to stay in cities without earning anything; their only hope is their native villages and small towns, where they do not need to bear expenditure for accommodation, and spend less on food and other necessities.

There are questions whether all the migrants will be able to return to their works after the lockdown is lifted. That would depend upon the nature of employment and the business activity. According to the 2017 Periodic Labour Force Survey , more than 90 per cent of the workforce is employed in the informal sector. A high proportion of migrant workers have been reported to be employed in the informal sector, carrying out casual wage labour, whereas only a small proportion of them are engaged in salaried jobs. Given the current structure of employment, especially in the urban informal sector, it is argued that the trend of reverse migration (from cities to native places) will continue for a longer-period, and might not change even after recovery from COVID-19. The reasons are as follows: firstly, long-term investments in sectors such as real-estate and construction sector will be hindered, releasing a large share of the workforce. As of now, the share of the construction sector in total employment is around 12 per cent and a large share of migrant workers are engaged in this sector. Secondly, the demand for durable goods is also going to be hit due to the recessionary outcomes of lockdown. A large proportion of migrant workers are also employed by the urban industrial sector. Where economic recovery after lockdown, for an already floundering Indian economy, seems to be difficult, the prospects for urban employment are bleak. Hence, a large proportion of migrant workers are unlikely to return back and join the urban employed due to the lack of availability of jobs.

In contrast to the exodus of urban migrant workers from cities, no such crisis has been observed for migrant workers engaged in the agricultural sector. A large proportion of farm workers migrate from Eastern States to Western States. There has been a complete restriction of circular migration during this lockdown. However, permanent migrant workers have chosen to stay at their respective work places. The farmers have reported the following main reasons. Firstly, the majority of these workers have been employed on annual or monthly basis rather on daily basis. Secondly, farm workers often do not have to pay for accommodation which is generally provided by the farmers.

The possibility of reverse migration for permanent farm labour will remain low due to the fact that policies will be directed towards raising food reserves and related products. Secondly, agriculture still provides employment to more than 44 per cent of the total workforce, so the priority will be given to revival of this sector in order to check deflationary pressures. So, the emerging employment situation in all other sectors is going to be worse, except for agriculture and allied sectors. In such a situation, permanent farm migrants are less likely to leave for their native places. In fact, circular migration trends will rise due to increase in unemployment/under-employment.

Some of those who have left for their native places may not get the opportunity to get back their jobs again. As such, rural labour markets will experience several changes due to the fact that a large share of returnees will seek employment at their native places. The agriculture sector cannot provide year-long employment and rather provides only seasonal employment during harvesting and sowing periods. Secondly, the rural non-farm sector, especially in Eastern Indian states has emerged as a parking lot for those who are unable to join urban informal sector. Rural non-farm sector largely constitutes petty trades, which are small and low-return businesses. Therefore, the prospects for labour absorption in the rural non-farm sector are also abysmal. In such conditions, rural labour markets may experience an increase in unemployment and under-employment, decline in wage-rates, worsening of working conditions, and an increase in petty trades.

The governments should intervene immediately to fix the rural employment scenario. Government has to ensure major public employment programmes. There is a huge potential for increasing the number of days of employment under MGNREGA (the Mahatma Gandhi National Rural Employment Guarantee Act). To be more optimistic, government should release the money to workers under MGNREGA even without work during the lockdown period. This may generate multiplier effects through improving demand for necessities and related products, and will check the further worsening of employment situation in India. Similarly, the remuneration of workers under other public sector programmes such as Anganwadi and Asha should be increased. In fact, during this pandemic, there is a need to provide more health and education services to the population. So, more recruitment should be done under health and education programmes as soon as the situation allows.

Secondly, the schemes meant for self-employment such as MUDRA (Micro Units Development & Refinance Agency) should be strengthened further to make sure that small businesses in the non-farm sector should survive during this economic downturn. Last, but not least, there is a need to increase public expenditure on agriculture and allied activities by providing farmers better prices for their produce, Direct Income Support, and credit at cheap rates so as to make farming sustainable during the period of depressed demand. This will not only ensure that farmers do not leave agriculture but will also cushion the over-burdened non-farm sector which is already facing a huge reserve army of labour.